The Danish Oikos Society held its annual conference on March 10, sharing new research on a broad range of themes in ecology and evolutionary biology. This event was the third of five virtual conferences hosted in spring 2021 by the national societies comprising the Nordic Society Oikos.

Held online due to the pandemic, the conference was open to all for free, with participants encouraged to join Danish Oikos or any of the other Nordic ecological societies.

“We had a total of 102 participants registered, and people went in and out during the day,” said Bjarke Madsen of the organizing committee, noting that the participants included not only academic scientists but also practitioners from Danish companies. The organizers took advantage of the virtual format to cast a wide net geographically. “I think we never had such a diverse meeting before, with participants from all over the world,” Madsen said. “Besides the Nordic countries, we had people from the UK, Italy, Spain, Switzerland, Estonia, Germany, and even outside the EU, from Brazil, India, and the United States.”

To meet the challenges posed by a digital format, the conference integrated a variety of features from Zoom and other platforms. “After the talks we had arranged breakout rooms for each speaker, and then participants could jump between the speakers to ask questions and discuss,” Madsen said. “That worked out surprisingly well, and gave rise to a lot of discussion.”

Presenters were also able to take advantage of a speaker preparation room. “Here the speakers could go in to test sharing their slides, and call for help if necessary, even during the other talks,“ said Madsen, adding that the feature proved valuable especially for those who were less familiar with Zoom. “I think at least one third of the speakers visited the room.”

Any participants encountering technical issues had the option of entering a support breakout room, although little troubleshooting was needed during the event, Madsen said. As a complement to Zoom interactions, the platform High Fidelity allowed participants to socialize informally at intervals throughout the day (“to enhance the ‘hygge’ feeling of attending an in-person conference”), using avatars to move around and talk with each other. Finally, the platform Miro allowed participants to provide feedback to the society, in the form of post-it notes on digital bulletin boards. 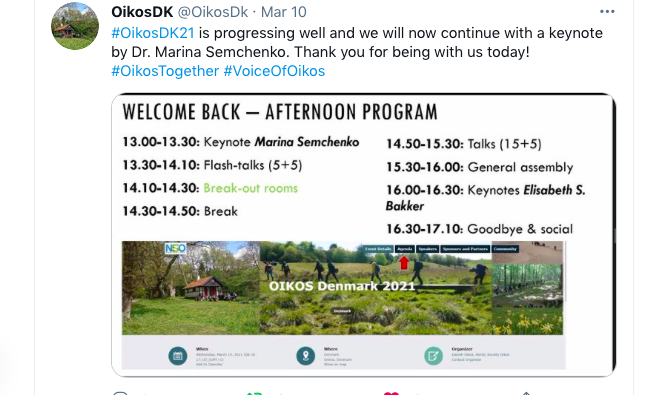 If you missed the conference, you can catch up on highlights by checking out the event hashtag #OikosDK21. Be sure to follow the Danish Oikos Society's newly established Twitter account @OikosDk. Finally, check out the #OikosTogether hashtag, which ties together all of the Nordic Society Oikos national conferences.